The world was buzzing this week with the news of the NEW Pope. After weeks of hearing the announcement from former Pope Benedict XVI that he was stepping down, Catholics became concerned. He is the first Pope to resign since 1415. Popes prior had remained in their position until death. While I am thrilled that Pope Francis I has calmed our fears of being leader-less we must not overlook the lesson we just learned. 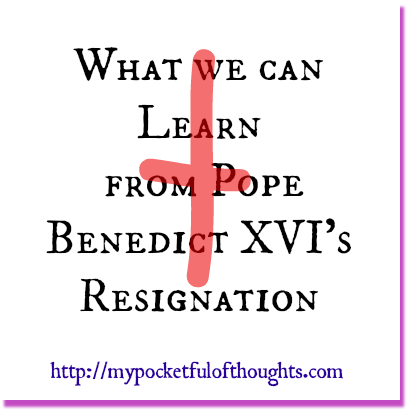 At 85 years old, Pope Benedict XVI made a decision to put Catholics first. Old age and a weakening heart left him without the strength to give his all. Being Pope is no easy feat. Not only does it require a physical stamina but a mental one as well. I know people would like to criticize him for resigning but I think he made the best move for himself and for us. Dedicating the rest of his life to prayer, we’re all reminded that our body is of mere flesh, but our spirit is not of this world.

Pope Benedict XVI will continue to look over us from afar. It takes a big person to step down from such a high position of power. It takes an even stronger person to put others in front of himself. He is a true example of a man who walks in the footsteps of Christ. It reminds us all to try a little harder.

These are the thoughts that stay with me as I think of today’s Mass. It is what I am reminded weekly as I attend rehearsal of The Stations of the Cross. Jesus Christ died on the cross so that we would be saved. Am I doing enough?

On a lighter note, the camera crew fro 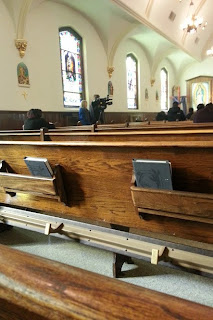 m News 12 was a little distracting but then its not everyday that an Argentinian becomes Pope. The current priest of St. George’s Catholic Church, Father Elio Sosa is Argentinian as well. News 12 did a brief interview of our priest who felt extremely happy to have a Pope chosen from his home country. Now that our Pope has been chosen I hope that brings the Bridgeport Diocese one step closer to choosing our Bishop. Our former Bishop, Bishop Lori is now the archbishop for the Archdiocese for Maryland.

Did you join in the celebration of the new elected Pope?

I leave you with one of today’s readings:

8 replies on “The NEW #Pope and the #Lesson we Learned from the last one.”

Preparing for one’s departure is a very responsible thing to do. That says you care that your legacy will live on. Looking forward to the good things that Pope Francis I’s papacy will bring.

Me to, I think he’ll shed a different light on things … The former Pope’s legacy will live on! Thanks Sheri for stopping by and sharing your thoughts with us!

I agree and I look forward to all the great things the new pope will teach us especially since his main theme of work is towards the poor and disenfranchised. Thanks for this article Arelis!

Yes, everyone is waiting to see what he will do. We’ll see what happens. Thanks for sharing your thoughts with us Caroll!

Thanks for this article. I end to know basic information about the pope and this gives me new food for thought.

You’re welcome Rachee! The former Pope gave us all food for thought. Thanks for stopping by!

I know of many people in lesser positions who would have a difficult time stepping down. The former Pope showed great service to God by leaving at a time when he felt that he was unable to serve to the best of his abilities. It is noble.

I agree, he lead by example! It is OK to take a step back sometimes. Thanks so much for stopping by Brandi!